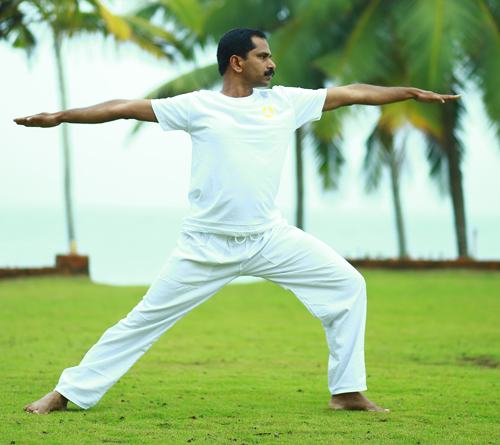 One of his passions , in addition to cure and treat, It is to train and provide expertise as a professional, for others to take the path towards life they want to live.

His story begins when small, playing with peers, innately , with pressure and stretching, he returned to consciousness several friends , after falling and received heavy blows.

Vaidya Ayurveda and Panchakarma Medicine by the Institute of Traditional Kerala. (duration of studies 5 years )

It is also a doctor who has followed the traditional training system in India , based on the teachings of Guru ( Master-disciple), which plays an essential role oral transmission of knowledge from generation to generation, for many centuries. And where the doctor prepares since childhood, and he spends his childhood and adolescence learning , delivery and total dedication, his profession, his dharma, that is to say, to develop their gifts and potential, what has come to realize in this life.

Specializing in traditional medicine Marma, Marma by the Association of Kerala ,duration of studies 10 years.

work experience 16 years, treating and teaching to people around the world.

He started working on Ayurveda Resorts in 2001, and in 2005 He made a retreat in your life, in an ashram, and he was formed as a teacher of classical Yoga Sivananda lines and Satiananda.

Since then he founded his own yoga center and ayurveda in Kerala.

In 2010 first come to Spain, which it will also create the Lotus Ayurveda and Yoga Center, with the aim of spreading the philosophy of India in the West.

” Yoga is a gift to humanity”

Thanks to all the ancestors, Yogis and teacher @ s that let me enjoy teaching yoga.

From small sample leanings towards the study of the mind, psychology and behavior.

With 17 year starts in shamanism ,which will culminate in Mexico 19 years, and will be the gateway to altered states of consciousness and to understand reality as energy.

Degree in Philosophy at the UAB . experience 15 years in secondary education ,Primary and child in the Department of Education of the Generalitat as a professor of philosophy, psychology and English .

In the year 2001 ,with 23 years, He made his first trip to India and will have their first yoga master.

Since then, refines his vocation and heads toward Eastern philosophy.

It is dedicated to the world of yoga and energy since 18 years.

He has studied and taught different yoga techniques and energy in India , especially in the line Satyananda , where he lived, and spent long periods in a 18 years ,and Catalonia .

The experience of motherhood in the 2013 accompanied by educational experience, leisure and yoga, It is the strength to engage in yoga for babies, Pregnancy and children, because they are the hope for a better future.

Founder and Director of the NGO We are U.N.O

Cofounder of the association of yoga and Ayurveda in Kerala, It is purporting to be a dialogue between East and West.

From the 2009 P.KUMAR assists and collaborates with Kerala in the training of Ayurveda ,Marma and Yoga Teachers.

Together they begin in April-May 2014, after working 4 years in Seu d'Urgell, Lotus, Centre d´Ayurveda ,Yoga and Personal Growth , with the aim of spreading the light of knowledge of India in Spain, and thus evolve by helping others in their growth.

We offer many courses , workshops , activities and therapies in different places , mainly in the Pyrenees of Catalonia and in Kerala ( India) and various modalities , weekdays, weekend, intensive and online.

If you need to request more information by email info@lotusayurvedayoga.com specify which course or therapy where and which modality .

If you do not see any date published on this page for any modality or place, it means that it is not scheduled for this year or there is no forecast.

TO CLARIFY WHAT ACTIVITIES OR COURSES ARE SCHEDULED, WE ADVISE YOU TO VISIT THE AGENDA PAGE, YOU CAN DO IT BY CLICKING ON THIS LINK, THERE YOU WILL FIND THE NEXT DATES AND PLACES OF EVERYTHING WE DO ORDERED

We offer many courses , workshops and activities in different places , mainly in the Pyrenees...

"Be the change you want to see in the world" Mahatma Gandhi DIRECTED BY MAESTRO NATIVE OF INDIA, ...

IT'S TIME TO START TAKING CARE OF US ! START OF YOGA AND MINDFULNESS CLASSES AT CE...

simplicity, authenticity and effectiveness are mixed to make these courses and treatments a unique and unrepeatable experience, ALSO ...
TRAINING AND COURSES

Good, the truth I have not had the chance to do any course, (which I hope to try someday) but if I have been fortunate d ...
MASSAGE AYURVEDA

enriching course for people who practice yoga in the West, since the fact that transmission is performed by one person ...
TRAINING YOGA TEACHER

a very entertaining and full course. p-kumar is a great teacher and helps you understand everything very easily, about ayurveda to occidente.La ...
AYURVEDA TRAINING

I did an Ayurveda treatment in Kerala ,of August 2009 .It is quite surprising and unimaginable improvement I have experienced. Cans...
PANCHAKARMA CURA Y ayurvédica IN KERALA
Top